Who is the Azawakh ?

His posture inspires awe and wonder right from the start. Then his eyes, that bore deep into yours, also make a deep impression; such is the strength and delicacy of his build under which bones, sinews, muscles and veins are clearly apparent, that any vet will tell you he's ideal for an anatomy class. There's nothing superfluous about him. His long legs and tail seem endless. Let him move, and you'll see him gliding about swiftly and effortlessly. He gives the impression of turning his nose up at his surroundings with his haughty attitudes. In fact, he stays aloof, watchful, swift, with his head held high, jumping away at the first cause of worry, trying to overcome or to understand a new situation. Whenever this happens, the strange feeling that he is somewhat feline creeps atthe back of your mind. Indeed, his behaviour resembles that of big cats, such as cheetahs. 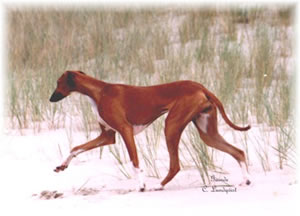 Though dogs are descended from the wolf, some believe Sighthounds may be descended from a branch collateral to the dogs and that they may be as ancient as wolves. Such characteristics as their morphology, their heart volume, as well as their higher rate of red corpuscles, their annual rhythm of mating periods and reproduction or their behaviour which is so idiosyncratic, come to support this theory.
The Azawakh, like the Sloughi, the Saluki and the Afghan hound, is very probably of oriental origin. He has been living for thousands of years with populations of nomad breeders of Berber origin, the Tuaregs and their vassals, who may have migrated from Asia, in the southern Sahara, called the Sahel, in Africa. As he lives with populations of cattle-breeders, his function is to protect the cattle, the members of the community and the camps against predators and intruders. He growls and howls to warn against intruders and prevent the latter from coming any closer. Should they insist and come to close, the Azawakh will charge them and harry them away.
The Sahel hound, as a hunting partner, has always taken part in sight-hunting, especially of gazelles. He hunts in packs, taking relays so as exhaust his prey, then bumping it down with his hindquarters when he get to its level. The Azawakh's habitat covers an area as vast as France and lies in the Niger Basin which includes the Azawakh valley, covering 3 post-colonial states: Mali, Burkina Faso and Niger. 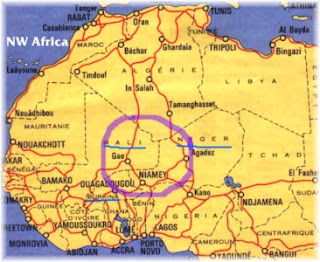 Geographic barriers, as much as social demarcations against other colonial areas, or the nomadic way of life spreading out populations over huge distances, have so far prevented any cross-mating of the desert hound. The first Azawakhs to be brought to Europe in the 70s by some French and Yugoslavian expatriates were readily assimilated to Sloughis, whom they resemble very much. However, their indeniably different characteristics eventually led the FCI (Federation Cynologique Internationale), under the leadership of France, to give the Azawakh Hound breed official recognition in 1981. There have been about 500 registrations of Azawakhs in France since then.

The Azawakh is a big Sighthound, 64 to 74 cm ( 25 to 29 inches) at the withers for dogs, and 60 to 70 cm ( 23,5 to 27,5 inches ) for bitches; it weighs between 16 to 25 kgs ( 35 to 55 pounds), -the weight of an average breed-. He is especially thin and elegant, giving an impression of great slenderness. His "standing rectangle" body structure makes him seem even taller than his long legs already do. His hips should be higher than the withers. His muscles, which are flat and wiry, are very apparent under the thin skin which is covered with very short, soft hair. The chest and abdomen may even be completely bare of hairs. Seldom fat in his natural habitat, he is thus kept thin in Europe, overweight being bad for his health.
His head is long, fine, dry and quite narrow. His skull is nearly flat, the brows and stop hardly noticeable, the occiput clearly defined, and the lines of his muzzle and skull slightly diverge. His jaws, though slender, are strong and designed to catch and kill their prey. Muzzle is long, getting thinner and thinner, with open nostrils and an either black or brown nose. His big almond shaped eyes lined with black give an impression of great depth. The ears are pendant, broad based, hanging close to the skull. Their bases pick up when he is alert. 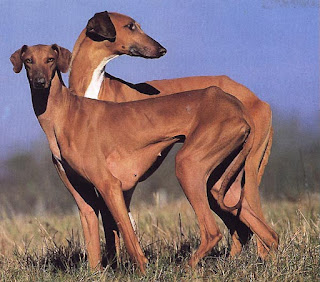 The chest is well developed, wide enough for the volume of the heart. The sternum, clearly accentuated, sets the line for a deep and narrow chest that gives way to a very high stomach line. His top line is level, his hipbones clearly distinguishable, either as high as or higher then the withers.
Stemming from a low base his tail is long, thin and covered with the same hairs as the body. The colour of his coat can range from light sand to dark red, with or without brindle. His head may or may not have a black mask or a white blase. The white throat patch, white socks and white tip of the tail are compulsary or at least traces of them.

His elegance might mislead you into thinking he's got no resilience, which isn't the case. As he is used to the Sahel's rough climate, the Azawakh can bear great thermal variations (from freezing at night to 50 degre C in the day), is happy  with a very little food (though atavistically insatiable !), has a very dense skin texture. and hardly ever hurts himself. His health is perfect with no particular problems;  whenever hi has an accident,  he'll recover very quickly, and is extremely tough. He is a real athlete, and you'll never please him more than when you take him to do some lure cursing, which is the reconstitution of a hunt without a live pray. The more conventional racing-track races do not appeal to him as much, as they  are too humdrum to his taste. 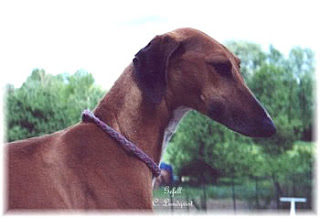 Dog lovers are often nonplussed by the behaviour of sighthounds, and especially the Azawakh's. Cat-lovers might feel more at home with him. The Azawakh isn't a truly domestic pet dog. Even when he is bred by man in family surroundings at home, he will quickly assert the fact that he belongs to a world of independence and wilderness. He likes to live with fellow-dogs and is family-minded. Every individual has to find its place within the hierarchy that is set up.
He remains aloof with strangers, and can become aggressive if need be: the "camp" and the "cattle" are in his custody. He always stays independent, reserved and swift, even if he comes to appreciate and love certain friends or regular visitors. He is the one to decide when you can pet him, and who can. He normally doesn't run away, but it sometimes takes a lot a persuading to make him come in or go out. Don't hope to get him under your thumb: he can't bear physical restraint, but will mellow down in time, when he more mature and feels he can trust you.
He is a close, sweet friend of the family, a real darling with your children as long as they respect him. Respect is the key word as far as the Azawakh is concerned. Whenever his life is shattered through desertion, loss  or accident, he may go back to his wild state for some time.
Seniority is generally the way a group of Azawakhs will set up its hierarchy. They have a dominant bitch, a dominant dog, and a retinue. The dog dominates other dogs, the young ( dogs and bitches ) as well as some of the more submissive bitches. This hierarchy can be quite complex. 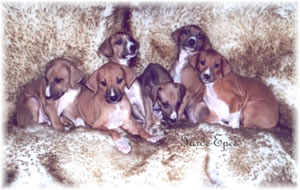 The bitch has one mating period a year, and accepts the sire's honours only between the 14th and 20th day, which is much later than for most breeds.
Whenever she expects a litter, she'll prepare her den digging deep holes in the garden, as is done in the Sahel. After a two-month gestation, she gives birth to litter of an average 4 to 8 puppies. Thanks to a rich and abundant milk supply, she will be able to feed then until they are 4 or 5 weeks old. When they reach that age, their sharp babyteeth get painful for her teats, so she hardly lets them suckle any more, but regurgitates freshly eaten food for them instead. The pups get the trick very quickly, chasing her and licking her lips for her to feed them, which she can do until they are up to 6 or 8 months old. The sire, provided he lives with his bitch, may also feed the pups. He takes part in their education, plays with them more than their mother, and protects them.
One to 3 month-old puppies can have highly aggressive games. It is at that period that they learn to communicate, to control their strength, to establish a hierarchy within their group, and to submit to grown dogs and to humans. They also learn tolerance to other species such as cats, horses, etc., through cohabitation.
When he leaves his first home at the age of 3 months, the Azawakh will adapt rapidly to his new family, sometime may be too much so. From the beginning, you need to show both intuition and reason in his education. He needs a strict, fair, reassuring and loving pack-leader, which his master is to stand in for. You must set and enforce strict rules not to be trespassed, otherwise, the Azawakh is liable to become an awfully spoilt child. Both his master and him have to make concessions to live in harmony.

It is better for him to have permanent access to the garden, but he can do without. It provided you often take him out, and he can unleash his energy in great runs at least once a week. You can take him out for walks without a leash, as long as the terrain is safe, once he has got used to you. The Azawakh loves running and his favourite game is to chase or be chased by another dog in highly technical races around bushes, ponds and trees. They run, jump one over the other, feinting at each attack, hitting the ground with their front legs as an invitation to play and immediately bounding away.
As the Azawakh cannot do without his masters, it is essential that he should live at home. Cohabitation with other animals is no problem as long as he gets used to it in his early days.

Many Azawakhs have to share their home with cats. In Africa, when young, they are tied among the goats of the herd so as to count them as family members and defend them against predators.  You must take him out with you to your friends as soon as you get him, and also teach him to accept visitors at home without considering them as "intruders" or "predators". Given a good education, a lot of pedagogy and a good deal of patience, the Azawakh will become a fully fledged member of the family. He is so unique and particular, so mysterious and fascinating that you can never give up on having one by your side.

Mes autres sites / My other webpages